The ACT-I-VATE Experience screening in Brooklyn

Come see a screening of the latest film by myself and Carlos Molina next Friday night. The ACT-I-VATE Experience focuses on the webcomics collective, ACT-I-VATE.com, and features over 20 comics creators discussing their work, the industry and webcomics in general. Even if your not a comics fan, we think you'll find the film interesting.
See details on the poster below-

I'm focusing today's selection of the series on miscellaneous beautiful women from the world of entertainment.

Adrianne Curry, best known as the first winner of the reality television series America's Next Top Model. She is married to Christopher Knight, and the two appeared together on the TV series My Fair Brady.

Kelly Hu, best know for her role as Lady Deathstrike in X-Men 2.

John Schneider, best known for his portrayal of Bo Duke in the TV series The Dukes of Hazzard, and as Jonathan Kent on Smallville.

Tom Wopat, best known as Luke Duke in the TV series The Dukes of Hazzard.

Vincent Pastore, best known for the role of Salvatore "Big Pussy" Bonpensiero on The Sopranos.

A few more in the series below, from the world of TV.

Julie Newmar, most famous for her role as Catwoman in the Batman television series.

Christopher Knight, best known for playing Peter Brady on the 1970s series, The Brady Bunch, and most recently in VH1's reality series The Surreal Life and My Fair Brady.

In today's installment, I'll focus on three actors from the wold of film and Sci-Fi.

Linda Hamilton, best known for her roles as Sarah Connor in The Terminator and its sequel Terminator 2: Judgment Day and as Catherine Chandler in Beauty and the Beast.

Ernie Hudson, best known for his roles as Winston Zeddemore in the Ghostbusters films, Warden Leo Glynn on HBO's Oz and Sergeant Albrecht in The Crow.
Posted by Seth Kushner News at 10/27/2009 07:49:00 AM 2 comments:

Continuing this series on iconic pop-culture personalities I photographed at the Wizard World Big Apple Con recently, I'm posting a few major figures from the world of Sci-Fi.

Brent Spiner played the android Lt. Commander Data in the series Star Trek: The Next Generation and four films.

Billy Dee Williams best known for his role as Lando Calrissian in the Star Wars films as well as pitchman for Colt 45 malt liquor.
Posted by Seth Kushner News at 10/26/2009 07:40:00 AM No comments:

I spent last weekend at the Wizard World Big Apple Comic Con, photographing iconic celebrities, mostly from yesteryear. It's for a series I've been working on for a while. Click the word "Celebrity" at the bottom of the post to see the ones I shot in the past.
My goal with this series is to shoot close-up examinations of my subjects so the viewer can really study their faces and eyes and get a sense of what these famous figures are all about.
I took many last weekend, so I'll post a few at a time. Today I'll begin with some legendary retired pro wrestlers.

Be sure to check out my older posts to see my portraits of wrestlers Iron Sheik and Nicolai Volkof.
Posted by Seth Kushner News at 10/23/2009 03:03:00 PM No comments:

Friday afternoon, I left the Big Apple Comic Con and all of the forgotten celebs I was shooting (post coming soon) to meet up with my GRAPHIC NYC partner, Chris Irving and comics creator Brian Michael Bendis. We met in front of the Flatiron Building, the building that houses the Marvel Universe's Daily Bugle in the Spider-Man films.
I've been a huge fan of Bendis since his indie days when he was doing books like Jinx and Torso. Then, he moved into the Marvel Universe, and for me, (and I'm sure many) he brought a new sense of realism and originality. He also brought along what naysayers call "decompressed storytelling," but what I like to instead call "long form" storytelling, where the stories are allowed time to play out. That, along with his snappy Mamet-like dialogue and fresh takes on old ideas, have infused excitement into books like Ultimate Spiderman, Daredevil, Alias, New Avengers, and many others.
As for the photo, I'm sure you can see that Brian really brought it.

This week's creator profile on GRAPHIC NYC is of the legendary Neal Adams. See it Here. 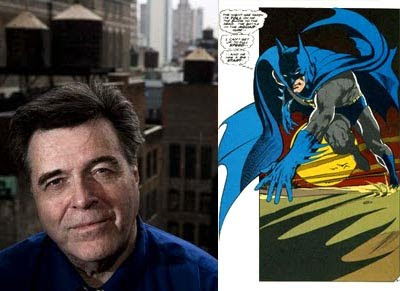 In my third bi-weekly column for GRAPHIC NYC, I interview and photograph comics publicist Jeff Newelt. See it Here. 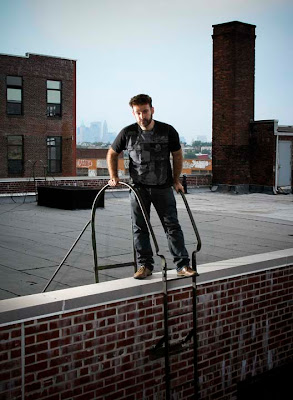 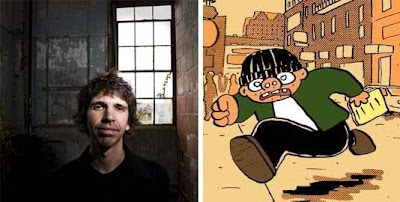 Carlos Molina and I traveled to Baltimore this past weekend to unveil our film, THE ACT-I-VATE EXPERIENCE at the Baltimore Comic Con and writer Jim Gibbons of Comic Book Resources was there to cover it. See the whole article Here, and see below for an exert. 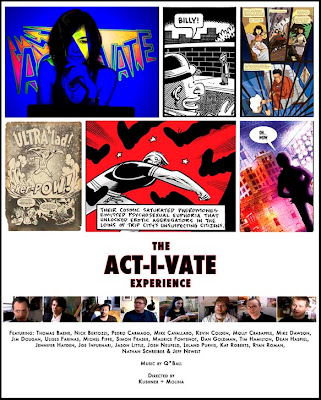 The group was also there to premier a 32-minute "promomentary" entitled "The ACT-I-VATE Experience" about their online haven for personal comics projects that had been put together by Seth Kushner (Graphic NYC) and Carlos Molina from Culture Pop Productions and announce a new series of strips by a well-known creator that would be popping up on their site soon.

After introductions, the creators - who had yet to see the film themselves - joined the audience to view the piece.

Beginning with a montage of art from ACT-I-VATE, the film is segmented into three parts, each of which is filled with testimonials from more than 20 of the ACT-I-VATE creators. The first chapter acts as an introduction, where the many faces you'll be hearing from introduce themselves and their diverse, signature ACT-I-VATE work. The second part explains the origins of ACT-I-VATE and why the different creators enjoy the format of their collective, while also discussing the benefits that go along with the online medium and its readership. The final part of the video highlights "The ACT-I-VATE Primer," during which Haspiel explains that the primer is a great introduction for comic fans who haven't checked out the site, while containing entirely original content that can't be found online, so folks who have been keeping up with all ACT-I-VATE has to offer can get a new fix in print form.

"I believe 'The ACT-I-VATE Primer' is the ultimate bridge between print and webcomics," Haspiel said in the film.

The film will be airing at Haspiel's spotlight panel at this coming weekend's Alternative Press Expo in San Francisco, Brooklyn's King Con on the weekend of November 7 and 8 and at Quimby's Bookstore in Chicago (tentatively scheduled for November 13). The film will then be made available online around Thanksgiving, according to Haspiel.

Though the film is admittedly a promotional tool for ACT-I-VATE, the interviews it features are chock-full of thought-provoking sentiments and information that fans of webcomics or comic readers that haven't given webcomics a shot should find interesting.

"It's also a place that makes you bring your 'A' game," Leland Purvis ("Vulcan & Vishnu") said in the "promomentary" of ACT-I-VATE's ability to make him strive to better his work. "I've gotta make sure [my ACT-I-VATE work is] really the best I can do. And, you know, in a lot of other areas in our lives, we do enough to get by. [But] with ACT-I-VATE and my peers right alongside me, you really have to do your best."

"You can't put ACT-I-VATE under one genre," the film quoted "Sleazy Pizza" creator Ryan Ramon as saying. "You can't say, 'Oh, they're a sci-fi group.' It's just a lot of complicated, crazy stuff."

"Webcomics are the future of serialization. It's as simple as that," Colden explained in the film. "Independent creators have no reason to publish [print copies]. It's basically a money-loser. Anyone you talk to who has published their own [printed comic] has lost money. But, with webcomics, you can distribute to an infinite number [of readers] and you don't have to put any money into it up front."

"I know there are a lot of success stories in self-publishing, but most of us who've published that way…we don't really make money," Cavallaro said in the film. "So, if you just accept, that the best thing is [I] put some money in this and I know I'm not gonna make it back. As soon as you accept that, then what are you really doing? What you're really doing is, you're trying to communicate and reach people. So, in that case…you might as well choose a model that helps you reach the most people and gets the most exposure for your art."

To celebrate Harvey Pekar's 70th birthday, Smith Magazine and comics editor Jeff Newelt have assembled Pekar portraits from 100 great artists. Somehow, I managed to be included among the all-star list. See my mixed-media contribution below and check out the amazing gallery Here.

I'm very excited to be debuting THE ACT-I-VATE EXPERIENCE, the documentary co-directed by Carlos Molina and myself, this Sunday at the Baltimore Comic Con. Details below.

Check out my second written piece for GRAPHIC NYC, "How Harvey Pekar Got Me Laid," here. 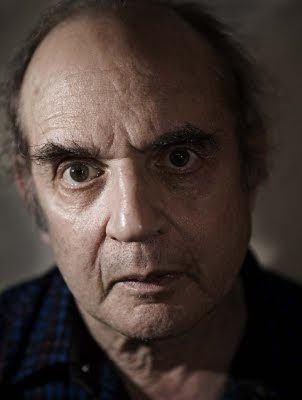 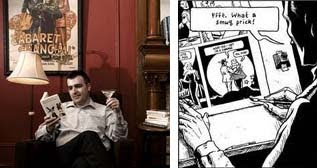 I had the pleasure of photographing Marvel Comics Editor-In-Chief Joe Quesada this week. The shoot was actually for L'Uomo Vogue magazine, but afterwards, I managed to get a portrait of Joe for Graphic NYC which I hope conveys his strength and importance to the world of comics, and the Marvel Universe in particular. I like Joe's wardrobe choice, as it comments on recent headlines.
I'll post some of the other shots I did for Vogue soon.