A Few Words and Pictures About Harvey Pekar 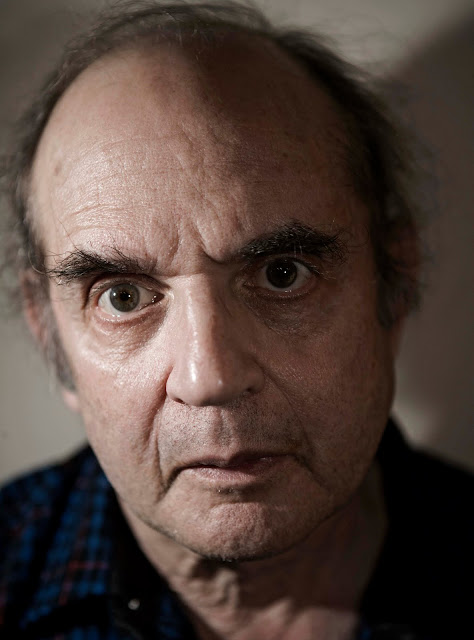 There are many people paying tribute to Harvey Pekar today; some whom knew him far better than I, and others who are much better with words. But, as someone who has been affected by Harvey's work, I felt the need to pay tribute.
I didn't know Harvey very well at all, not personally at least. I knew him as many did, through his work, and the great film, American Splendor. I first met Harvey in February 2009 when he was speaking at YIVO here in New York. When I first heard about the event, I immediately got on the phone with Jeff Newelt, Harvey's editor on SMITH Mag's Pekar Project to ask for access so I could take his portrait. I'm always looking to make an iconic portrait of my heros and Harvey was certainly among them. Meeting Harvey, I was almost expecting him to look like a R. Crumb drawing, or maybe like Paul Giamatti, and I was surprised by how much he looked like, well, Harvey Pekar. I only spent five minutes with him, but I got what I needed and was happy to have made the photo above, among others. 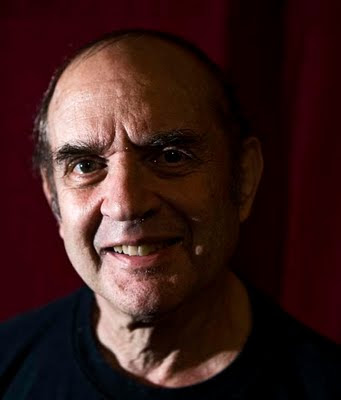 The second time I met Harvey was at the King Con in Brooklyn last fall. Christopher Irving and I were granted a session to profile him for GRAPHIC NYC. I got to know him a little better that time. My plan was to merge Christopher's interview based essay, with fumetti (photo comics) to make a sort of photographic American Splendor. Because I did the shoot previous to the interview, I didn't know what he was going to say, so I knew I had to get a variety of expressions out of him in order to make the piece work later. I explained to Harvey and he immediately understood, and playfully displayed a range of emotions, as I called them out. "OK, now angry," I said and he put on an exaggerated sour puss. Most amusing was when I asked for his happy face, and a smile crossed his lips, his eyes lit up, and suddenly I realized I never saw Harvey Pekar smile before. Perhaps, in his role as America's favorite curmudgeon, he was just expected to be that all the time. But, his smile was genuine. He was a happy guy.

Feel free to view the whole fumetti profile, but for now, below are the last three pages, where Harvey discusses the then-current stated of his career. 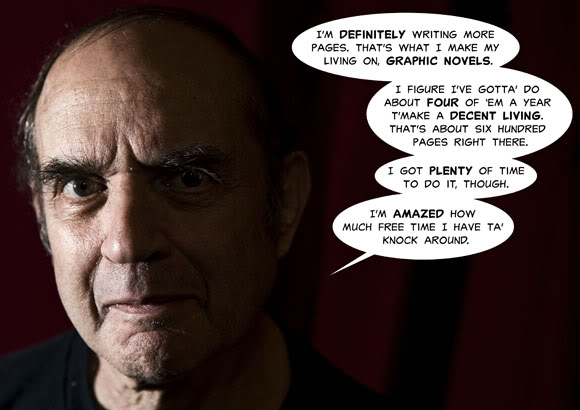 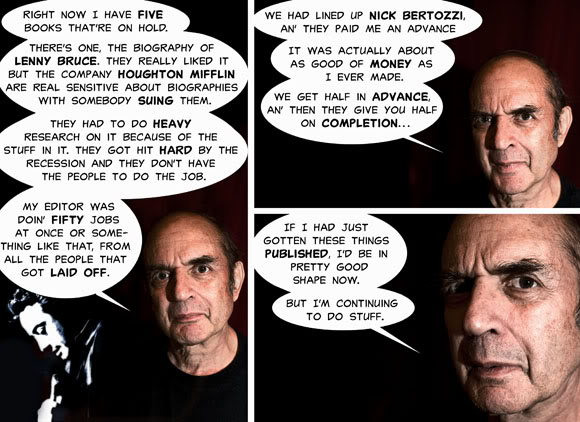 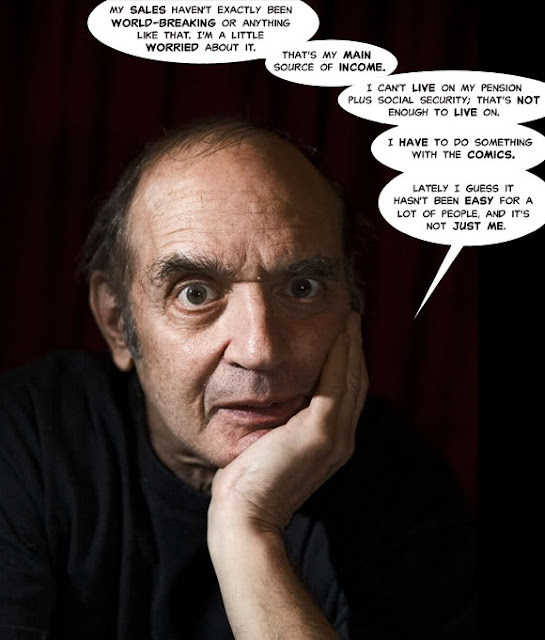 Harvey Pekar, a seemingly ordinary guy from Cleveland, a former file clerk, made an indelible mark on comics, influenced several generations of comics creators, and died too soon. His volumes of published work (and more to soon be published) will live on to inspire future generations. He will be greatly missed but he will not be forgotten.
Posted by Seth Kushner News at 7/14/2010 02:30:00 PM No comments:

Thanks for continuing to follow my experimental webomic, CulturePOP: "Photocomix Profiles of Real-Life Characters." This installment actually ends what I'm referring to as "Season-1." Thanks to all who have been following these photocomix. They've been a blast to work on, and I'll be doing more for a September relaunch.

This week's edition, Douglas Rushkoff: Taking Back the World, is the story of an author and media theorist and his thoughts and ideas on currency and corporatism, how our society has come to be defined by corporate culture, and how we can as people can take back the world.
See it here - http://activatecomix.com/104-12-1.comic

If you'd like to go back and read from the first chapter - http://www.activatecomix.com/104-1.comic

I'm particularly proud of this last piece and not just because of the huge undertaking involved in it technically. The work of Doug Rushkoff has been of particular interest to me lately, so I'm glad to be able to help spread his ideas.

Thanks to Jeff Newelt for his help with making this piece happen and for his help with the editing and for hyping it. Thanks to Dean Haspiel for all the time spent working on editing this with me, and for his comix advice. A special thank you to Doug Rushkoff himself for committing so much of his time to collaborate with me and for believing in this experimental approach to profile and storytelling.

Check out the latest issue of L'Uomo Vogue, which is the "Next Generation All Stars" issue, to see my portrait of Dash Shaw. Or, you can just look below.

The final installment of Season-1 of CulturePOP: "Photocomix Profiles of Real-Life Characters" is coming Monday 7/12. It will be a giant-sized 12th episode on author/media theorist Douglas Rushkoff, titled "Taking Back The World."

In the meantime, please check out any of the previous eleven photocomix profiles you may have missed:

Seth Kushner loves comics and loves taking photos of interesting people. Over the past year, Seth began experimenting with combining the two passions, in the form of photocomix, AKA fumetti, first popularized in the U.S. with Harvey Kurtzman's Help and later in Robert Crumb's Weirdo. In those cases the photocomix were played for laughs, but Seth's doing something different: a fusion of photojournalism, personality profile, and comix. His first photocomix profile was of Harvey Pekar, for GRAPHIC NYC, the comics journalism site he co-edits, and the reception was so positive it set Seth to concocting an ongoing photocomix project.

"What Seth achieved with that Pekar interview-cum-comic was a triumph," said Jeff Newelt, Harvey's editor on The Pekar Project. "He took key moments of an interview, matched the words with photos he took, and sequentially arranged the results so as to read as smoothly as an American Splendor comic. I work with four artists who masterfully illustrate Pekar's words, and I was dumfounded by how much Seth's experiment succeeded."

CulturePOP is co-curated by Jeff Newelt, and edited by Dean Haspiel.


Seth Kushner — shoots portraits of celebrity-types for such publications The New York Times Magazine, Time, Newsweek, Businessweek, L'Uomo Vogue and others. Seth's first book, The Brooklynites, (with Anthony LaSala) was published by powerHouse Books in 2007 and was) considered ”a terrific coffee table photo/interview book” by The New York Times. Currently, he's co-editing the comics journalism site Graphic NYC (www.NYCGraphicNovelists.com) with Christopher Irving and working on his next book on comic book creators. Seth first comics work was Schmuck, with artist Kevin Colden and can be seen on ACT-I-VATE.com
Posted by Seth Kushner News at 7/01/2010 10:05:00 PM No comments: