Writer, inker, publisher, Jimmy Palmiotti invited me and the other curators of TRIP CITY, Chris Miskiewicz, Jeffrey Burandt and Dean Haspiel to contribute to the comics anthology magazine, CREATOR OWNED HEROES #7. COH7 boasts great talent, comix, essays and profiles by Steve Niles, Justin Gray, Darwyn Cooke, Dave Stewart, Scott Morse, Jimmy Palmiotti, Paul Mounts, Jerry Lando, Chris Irving, Steve Bunche, Bill Tortolini + a brand new LEAPING TALL BUILDINGS: INDEPENDENT SPIRITS profile on Evan Dorkin by Christopher Irving and me.
My comics contribution to the magazine is COMPLEX, a photocomic I've been quietly working on developing in my spare time with Chris Miskiewicz and Dean Haspiel.  It's four lost souls orbiting each others lives in an attempt to make a connection that matters before the end of the world.  It's an ambitious project--nearly 200 pages all to be shot like a movie.  I previewed it this past summer with one image in the American Photo photocomix profile on me.  Wanting to experiment further before committing to the long project, I decided we should write and produce a short prologue, which we did the past summer and it ran in Creator Owned Heroes #7 and was met with glowing reviews.

Check out what some of the critics had to say about COMPLEX: Luv_Underscores_U:

“Complex” is the name of the overarching work, while this particular segment is called “Luv_Underscore’s_U”. Both of those names are appropriate for the story, but “Complex” especially.
“Complex” is hard to pin down, Foisy is Jasmine Bendory, a reporter assigned to interview VJ Quid, a VJ who appears to play floating computer image music things. VJ stood for “Video Jockey” in the halcyon days of Downtown Julie Brown, but it doesn’t seem that VJ Quid is standing in front of a camera shouting about Billy Idol, so it probably means something else in this context. It’s a sci-fi comic though at the same time I feel like the ideas being talked about in “Complex” are probably a lot closer to reality than I’m aware of since I barely spend any amount of time in reality as it is and when I am present I’m not looking up tech enhancements. I’m usually just picking up my Wednesday haul at Comics and More.
“Complex” flits through genres, as quickly as it moves, making you wonder if this is actually a science fiction story, or an erotic one, or a fame parable or a character study. It’s all of those things and it accomplishes them in a very small amount of time, and though the work itself is short you can tell that a lot of work and love went into it. It’s a comic that challenges your perceptions not only of the high minded ideas being bandied about, but also your perceptions of what comics should look like. Photocomix are not an easy sell and it’s because it’s so difficult to get them right, to avoid making something that looks like it was thrown together for Wizard Magazine (RIP) filler. You need to have models who can capture the range of emotions demanded by the authors without appearing to be trying too hard and Foisy and Miskiewicz nail it effortlessly. An enticing introduction to a story I hope to see more of soon.
Louie Falcetti, Bleeding Cool
http://www.bleedingcool.com/2012/12/09/review-creator-owned-heroes-7/


Photo-comic COMPLEX: “Luv_Underscore’s_U” by Seth Kushner, Chris Miskiewicz, and Dean Haspiel reminds us that the comics medium is expansive, varied, and should never feel too comfortable. Katelan Foisy and Miskiewicz star in this futuristic psychological landscape where the solid realities of the photo images help readers keep a grip on the otherwise shifting definitions of reality in the narrative. There’s a subtle ambiguity in the nature and future of technology, it’s use and misuse to contribute to human experience, and on the whole the photo-comic not only tells the reader but shows the reader the spell-like suspension of disbelief comics, in the right hands, are still capable of creating.
Hannah Means-Shannon, The Beat
http://comicsbeat.com/creator-owned-heroes-7-a-penultimate-review/


I’m not going to describe this story because words aren’t enough.  You have to pick up this book to see for yourself this compelling, thought-provoking, innovative short.
Julius Freeman, One Geek Nation
http://www.onegeeknation.com/2012/12/04/review-creator-owned-heroes-7/

Look for announcements regarding the future of COMPLEX soon. 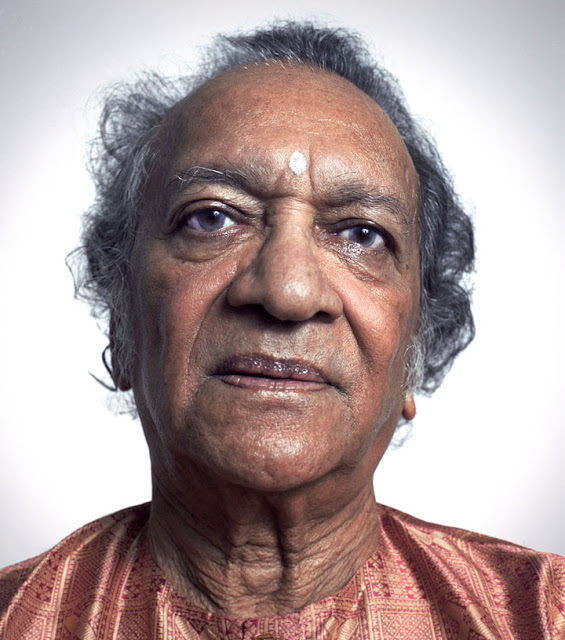 I was saddened to hear of the loss of Ravi Shankar.  I photographed him back in 1998 for Newsweek magazine.  I barely knew who he was, but I diligently did my research and I learned about how he was India's best known musician and a master of the sitar and about his connection with George Harrison and The Beetles.

I took his portrait in a midtown Manhattan hotel room.  He was here on tour with his daughter Anoushka and I shot photos of them together too and with their sitars.  This was back before digital and unfortunately, the above photo is the only one I had scanned.

I was only about a year into my photography career and I remember Ravi Shankar to have been a kind and patient subject.  I am happy to have captured his fascinating and wizened face and proud to have this iconic figure as part of my body of work.