A while back I posted an image I created for the show, Things To Ruin. I was recently sent the final version, with the logo. See below, along with some individual cast shots I took on the same day.

The GRAPHIC NYC site has been updated for with a profile on Dan Goldman, who's new book, 08: A Graphic Diary of the Campaign Trail drops today. Check out this week's piece here.

Last night brought our Q*Ball music video shoot to a close. Q was a trooper performing while floating in a cold, dark pool.
Working on this has been another great experience, and I plan to direct more videos in the future.
Carlos Molina and I will now edit the footage and will post the final, completed video in a few weeks.

The GRAPHIC NYC site has been updated for the with a profile on Dondi creator and All Star Comics veteran, Irwin Hasen. Check out this week's piece here.

After many months of talking about it, I'm very proud to present my music video directorial debut, GET IT TOGETHER, by Maya Azucena.


Get It Together from Corey Leavitt on Vimeo.

NOW IS THE TIME TO REMIND AMERICA OF THE FIERCE URGENCY OF NOW...NOW IS THE TIME!”
Maya Azucena’s new music video, featuring the inspired Martin Luther King Jr. sample, is now HERE. GET IT TOGETHER, produced by DJ Black Panther, directed by SETH KUSHNER, is ready for your viewing pleasure. 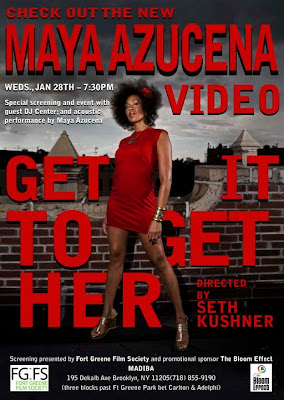 Get It Together is an advance single from Maya Azucena’s forthcoming project. The song was meant to be a practical look at trading in self-hatred and violence for following your dream, and knowing your power. Instead of complex lyrics, Maya took the approach of writing a heartfelt sing-along triggered by the opening Martin Luther King Jr. quote. Now is the time to make a difference. Now is the time to live to the fullest capacity. Now is also the time to check out the video.

The Big Screen Debut of GET IT TOGETHER, presented by the FORT GREENE FILM SOCIETY, and promotionally sponsored by THE BLOOM EFFECT, will be at MADIBA’S in Brooklyn on WEDNESDAY JANUARY 28th. This FREE celebration party will feature the new video plus other treats, an impromptu acoustic Maya Azucena performance, and the spinning wheels of DJ Center.
Posted by Seth Kushner News at 1/19/2009 08:24:00 AM 5 comments:

I thank God Amanda thinks I am attractive, but honestly I don’t feel like a prince away from her, but I got to hand it to a photographer friend of mine named Seth Kushner. Check out his work and the cool photos he has taken of a lot of the N.Y. area creators. The man is brilliant at his 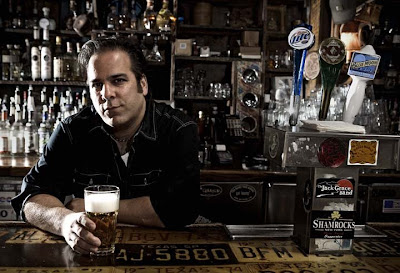 craft and a super nice guy. Seth has a skill that I think people seem to take for granted these days and it’s on display on his NYC GRAPHIC blog site.

Further embarrassing me are Mike Dawson's complimentary thoughts on his blog-

up on The Pulse with Seth Kushner

about the photo book he’s been putting together, Graphic NYC

. This is a book of photos and essays about New York based cartoonists. I’m included, and the image of me is up in The Pulse interview. 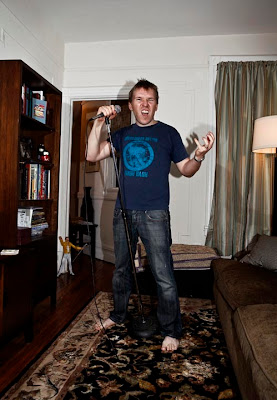 I don’t think I’ve posted this before, so apologies if I have. Seth came over to the apartment to shoot this pic over the Summer, right around the time The Baby was getting ready to arrive, so my memory is foggy. Initially I was hesitant to ham it up for the camera as much as I am in the photo, because, well, that’s my personality. But, like a true photographer of models, Seth was able to coax some energy out of me, and get me to "work it" for the camera.

I think all of the pics that Seth has for this book look amazing, and I am really hopeful that he’ll find a great publisher for it soon.

It was another late night of shooting the Q*Ball video last night for Carlos Molina and me. The scene last night was of a high school-aged Q*Ball and his girlfriend sneaking into the school pool and frolicking. Thanks to Sal Pavia as the teen-aged Q*Ball and Kara Cristiciello as the object of his affection.
Shooting is going really well, with only one more night to go. See photos below and click for a full slideshow of stills and behind-the-scenes images.

Mike Cavallaro's wonderful book, Parade (With Fireworks) was released today. I recommend it highly, and not just because I provided the author's photo!

We sent out a press release last week announcing the launch of the GRAPHIC NYC website, in hopes of getting some attention, and apparently it worked!

Just yesterday, I was interviewed by THE PULSE about the project.

We've updated the GRAPHIC NYC site today with a profile on artist/creator Paul Pope. We had some HTML problems, so the posting is two-days late this week, but well worth the wait, I think. We should be back on track in time for next week's update. Meanwhile, check out this week's piece here.

Last night Carlos Molina and I got back to filming the Q*Ball music video I posted about a few weeks back. We shot only one section, the guitar solo, performed in the song by guitar legend, and current Guns 'N Roses lead guitarist, Bumblefoot.
Two more night of filming to go and then we edit. I'm really excited about how project is shaping up and can't wait to show the finished version.

I posted some behind-the-scenes photos from my Maya Azucena video shoot a while back, and haven't mentioned it since, but now, it's finally edited and will debut next week. I'll post a link here then.
We'll be having a release party/screening to celebrate the video's release presented by the Fort Greene Film Society at Madiba, on Wednesday, January 28th at 7:30. There will be a special acoustic performance by Maya and DJ Center will be spinning.
I'm really proud of my first completed music video effort and can't wait to share it with everyone. Come on down, if you can - Madiba - 195 Dekalb Ave Brooklyn, NY 11205

Again, catching up, I had another day shooting for my pro-bono project for the Brooklyn based non-for-profit, CAMBA.
The project brought me back to Borough Hall to once again photograph Brooklyn Borough President Marty Markowitz. I'd never been in Marty's office before, so I was thrilled to find that it's like an explosion of Brooklyn memorabilia, as you can see in the photo below.
I also photographed CAMBA's Chief Investment Officer, Rang Ngo, on the roof of their Flatbush headquarter.

To continue catching up - On a cold December afternoon in Prospect Park, I did a promo shoot with "Writer, Entepreneur, Mrs. Purvis, Goddess-In-Residence, Agent of Transformation," Elizabeth Genco.
I just recently read and enjoyed Elizabeth's latest book, Blue. Also check out her work in the anthologies, No Formula: The Stories From the Chemistry Set, and Comic Book Tattoo Tales Inspired by Tori Amos.

I spent the holidays working with my collaborator, writer Christopher Irving readying the website for our project, GRAPHIC NYC, for launch today (see below). We've been working on this project for nearly a year, and now we are ready to share it.

Please pass along to anyone you think might be interested, and check back often, as we'll be updating regularly.

This Tuesday, January 6th, photographer Seth Kushner (The Brooklynites) and comic book journalist/historian Christopher Irving (Comic Book Artist Magazine Associate Editor) join forces to introduce a new brand of comics journalism, with www.NycGraphicNovelists.com.
The site is a preview of the work that Seth and Christopher are doing for Graphic NYC, their photo-essay book that combines Seth’s photos with Christopher’s in-depth interview based essays on New York cartoonists.
“I consider Graphic NYC, the upcoming book project that www.NycGraphicNovelists.com is based off of, to be a kind of ‘New Comics Journalism’, combining New Journalism with comics history, and Seth’s lush photography. I’ve been ready to bring a little something new to comics journalism for a while, and this is it.”
Graphic NYC not only features conceptual photographs of comic book auteurs in their favorite and symbolic environments, but it also paints a narrative picture through essays that employ on-the-spot interviews and a critical view of their most personal work. Like a graphic novel, it employs the marriage of words and images to tell a story; in this case, it is the story of New York’s position in the development and life of comic books.
Previous attempts at chronicling comic book artists have either been too general, showing the artist behind their drawing table and accompanied by a brief biography, or so academic that they turn off potential casual readers. Graphic NYC offers an insider’s view of the comic book industry in New York (both past and present), but is presented in an accessible and general enough manner for that casual reader, yet savvy enough for the long-time comic book fan to appreciate.
The first subjects introduced in the site’s launch are the legendary Howard Chaykin of American Flagg! fame, and emerging star Dash Shaw, of the highly acclaimed graphic novel The Bottomless Belly Button. Following will be photo-essays on Dondi creator Irwin Hasen, Billy Dogma’s Dean Haspiel, Dan Goldman of the upcoming ‘08 graphic novel, Mad Magazine’s Al Jaffee, Battling Boy’s Paul Pope, and other comics luminaries. Updated on a regular basis, along with reviews and commentaries of work by other NYC cartoonists, www.NycGraphicNovelists.com promises to serve as a Who‘s Who of New York‘s favorite cartoonists.
But www.NycGraphicNovelists.com doesn’t give it all away at once, notes Irving. The essays presented are not published in their entirety: that won’t happen until the book version of Graphic NYC hits bookstores.
“It’s only a matter of time,” Irving notes. “Until we find the perfect publisher for what Seth and I consider our dream project. But, for now, we‘re enjoying the total freedom of putting it online for everyone to sink their teeth into.
Posted by Seth Kushner News at 1/06/2009 10:10:00 AM 1 comment:

Happy New Year to all! It's a new year and after some much needed time off, I'm back up and running. I was crunched with deadlines before the holidays, so I'm way behind with postings. It will probably take me a week or more to get up to date on here.
I'll start with a shoot I did a while back for Lillot, a jewelry company. Jewelry designer Liliam Higa contacted me to create work for her new site. Her concept was more about creating a mood than showcasing jewelry. She was looking to create photos that would "Smell like David Lynch with French Woman Sexuality/Beauty." I loved her idea and her designs, which she describes as a "blending of tones of her multi-cultural background with visions of an ancient future."
The concept, mixed with a beautiful and evocative location, a lovely model, and Liliam's cool designs, made for successful photographs, I believe. See samples below and check out the Lillot website - I'm very happy with the design and how my work was incorporated.