The first 24 hours of the campaign for SCHMUCK were amazing with $3,965 raised, which is 27% of the total amount for which I'm asking! I'd say that qualifies as a successful launch. But, very reliable sources told me the first days are the strongest and I should expect it to trail off once it's no longer "new", which is what has happened.  As of today, with 19 more days to go, SCHMUCK has raised $7,066 from 127 backers.  That's no small amount of money, but it’s still quite a ways from my goal of $15,000.

There are two ways one can help. The first is to back the project, which many wonderfully generous folks have already done. The second way is to share the project on social media or forward to a friend you think might be interested. Or, even retweeting or sharing my  facebook updates would be great.  So, if you can find a moment to do any of that, I’d greatly appreciate it.

Several different articles have gone up online about the project:

Bleeding Cool posted a review, along with exerts from my book intro and preview art by all 22 artists: http://www.bleedingcool.com/2014/03/17/seth-kushner-and-twenty-two-artists-bring-a-schmucks-love-life-to-kickstarter-plus-bleeding-cool-exclusive-image-gallery/

13th Dimension posted my words about the making of Dean Haspiel's art for the exclusive Kickstarter edition of the book: http://13thdimension.com/exclusive-the-tale-of-dean-haspiels-variant-cover-for-schmuck/

Mental Floss listed SCHMUCK among their Most Interesting Comics of the Week:
http://mentalfloss.com/article/55649/most-interesting-comics-week

I wrote for 13th Dimension about my reasoning for publishing SCHMUCK independently. I think anyone who's had a book published will completely relate. "My situation is not unfamiliar to any of my friends who have published books with traditional publishers. In fact, I work at a studio in a warehouse building filled with cartoonists and comic-book makers where we often share publishing war stories. Without naming names, I’ve heard about major publishers who pay late, who don’t promote the books or the artist, who take covers away from the artist, who move up deadlines and hold off publication of completed works for years. The list goes on and on." http://13thdimension.com/an-independent-schmuck-by-seth-kushner/

An interview with me went up at Robot 6 by Tim O'Shea, which focuses specifically about the autobio nature of SCHMUCK: http://robot6.comicbookresources.com/2014/03/seth-kushner-on-his-schmuck-kickstarter/

CBS Man Cave Daily previewed the book with a posting of my comic collaboration with Nick Bertozzi, "SCHMUCK: Raising The Bar:
http://mancave.cbslocal.com/2014/03/26/preview-seth-kushners-schmuck/

Broken Frontier interviewed me on the making of SCHMUCK:
http://www.brokenfrontier.com/the-making-of-schmuck-photographer-seth-kushner-growing-pains-graphic-novel/

It feels great to have so many in corner who want to see my project succeed. I thank you all greatly for your support!!!

My Kickstarter campaign for SCHMUCK, the graphic novel 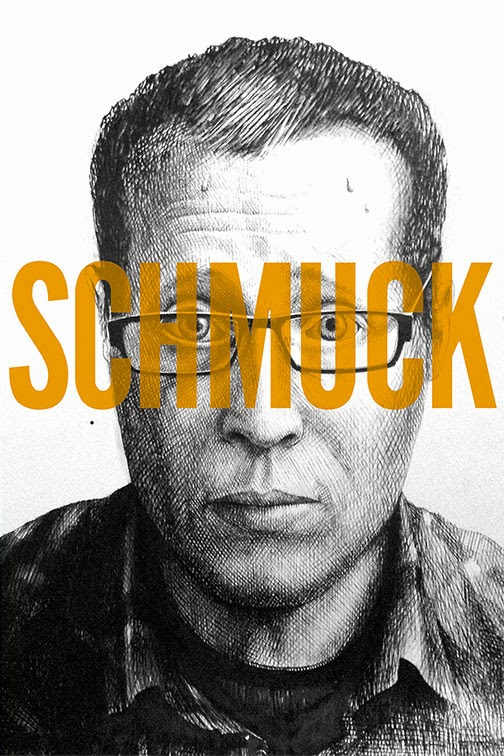 I've just launched a Kickstarter campaign to fund the printing of my SCHMUCK graphic novel.  This has been a several year long labor-of-love project and your support of this campaign will not only help me make the book, but also allow me to distribute to retail stores, Amazon, etc., while keeping the whole thing independent.

Please see attached cover for the mass market version, illustrated by Joseph Remnant (Harvey Pekar's Cleveland) and designed by Eisner Award winning designer, Eric Skillman (Tales of Sand).  Details about the 168-page book, including a list of all 22 amazing contributing artists can be found on the Kickstarter page, along with a listing of all the reward incentives.