Last Friday, Christopher Irving and I visited the Upper West Side home/studio of comics legend, Jerry Robinson. Mr. Robinson started working with Bob Kane on Batman in 1939, when he was 17 years old. Soon after, he was instrumental in the creation of both Batman's sidekick, Robin and his arch-nemesis, The Joker.
On the long list of his accomplishments, Mr. Robinson cites this as the one for which he is the most proud - During the mid-1970s, he and artist Neal Adams organized key support around his old friends Jerry Siegel and Joe Shuster, in their long struggle with DC Comics to win recognition and compensation as the creators of Superman.
Most recently, Mr. Robinson served as a creative consultant on the film The Dark Knight. 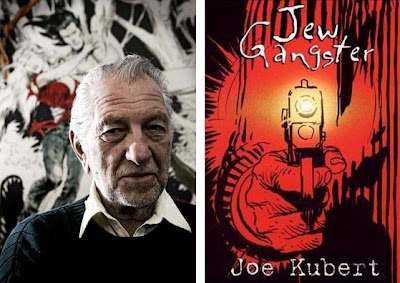 Yesterday morning brought Christopher Irving and me to the classic Upper West Side home of cartoonist Jules Feiffer.
Jules started out as the assistant to the great Will Eisner in 1945 and went on to doing a strip in the Village Voice for 42 years. He publish 19 books, including; Explainers: The Complete Village Voice Strips (1956-1966), The Man in the Ceiling and A Barrel of Laughs, A Vale of Tears.
The amazing thing about Jules are his incredible accomplishments outside of cartooning. He wrote the screenplays for Mike Nichol's film Carnal Knowledge and for Robert Altman's Popeye, among others. He won an Oscar in 1961 for his short animation Munro. He has also written plays, and in 1986 he won the Pulitzer Prize for his editorial cartooning in The Village Voice, and in 2004 was inducted into the Comic Book Hall of Fame. He also wrote the book, The Great Comic Book Heroes, which is considered perhaps the first piece of serious comics journalism.
For the portrait, I posed Jules on his living room couch, with his trusty sidekick, Lily, who appears in his next children's book. 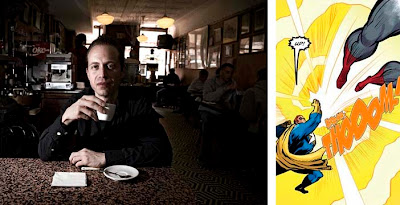 We've updated the GRAPHIC NYC site for the week with a profile of George O'Connor. See it here.

This past Sunday, Christopher Irving, Dean Haspiel and I took a road trip up to Suffern, NY to meet with comics giant, Walter Simonson. It was a memorable day for us, and one which Dean, who was once Walt's assistant, described so eloquently on his blog that I'll let him do the talking-

"Walter and I have been pals for almost a quarter of a century now and he always takes my phone calls, gives me warm welcomes at conventions and signing's, and shares his stories and wisdom whenever we parlay. A true mentor, mensch, and comix legend. Walter is one of the very few cartoonists who gets better with age. Walter's run on ORION, a few years ago, is, arguably, as good as his first few years on THOR and would have possibly surpassed that career watershed had he been afforded the opportunity to finish his intended storyline. Walter regaled Seth, Chris, and I with stories about NYC, Upstart Studios, and his first break into comix, plus, off the record shenanigans that any artist worth their salt has to laugh about.
Walter opened a closet door and said "Herein lies 36-years of my life," as we became witness to a monument of comix gold, stacked top to bottom, with pages of his original artwork. We got to hold and ogle the original art from his classic MANHUNTER collaboration with writer, Archie Goodwin. We perused original CAPTAIN FEAR, STARSLAMMERS, THOR art, and a sneak peek at THE JUDAS COIN, Walt's new, upcoming graphic novel from DC Comics. That, and sketches and childhood comix on type-writer paper from his earliest days. The walls were filled with famous paintings, illustrations, and original comix art from the likes of Jack Kirby, Steve Ditko, Alex Toth, Mike Mignola, and Howard Chaykin, among others.
After we sobered up from having been treated to the stuff of legend, we all went to a Mexican restaurant nearby where Walt and "Weezie," spun more yarns from back-in-the-day and Walter alluded to future plans and ideas including tidbits of his personal spin on a be all/end all Norse inspired story featuring a hammer wielding god for the ages."

You can read all of Dean's posting here.

There's only a few subjects left for me to photograph for this project, and they're all great ones. Like my subject yesterday, for example - legendary comics creator Joe Simon. Joe, as he instructed me to call him, is perhaps best known for co-creating Captain America with Jack Kirby in 1941. Afterwards, he and Kirby worked for DC Comics on such characters as Sandman, Boy Commands and Manhunter. They also created Blue Bolt, Fighting American, Stuntman, and the Fly, and worked on just about every genre of comics at the time, including romance, horror and western. Joe had many roles in the industry thoughout his career, from writing to art and editing to publishing. He was also the first editor-in-chief of Timely Comics, the company that became Marvel Comics.
Joe is very busy these days preparing for the release of seven books over-viewing his career from Titan Publishing, the first of which, The Best Of Simon & Kirby, will be released in May.

Writer Christopher Irving and I spent over an hour at Joe's West side apartment and it was a privilege to have been in his company. Even at 95, Joe is remarkably spry and sharp, reminiscing with us about the Golden Age of comics, of which he was a key figure.
My concept for the portrait was a simple one - capture Joe with his creations and allow his warmth and personality to shine through.
You'll notice a few extra images below. While Chris was interviewing Joe, I wandered around his apartment, fascinated by his stuff, and I had the thought that a person's belongings can reveal much about their personality. So, I took a bunch of photos of some of the interesting things around Joe's apartment. I wish I had thought to have done that with some of the earlier shoots as well.
Thanks to Stephen W. Saffell for making it happen yesterday!

We've updated the site for the week with a profile on Christine Norrie. See it here.

Finally, edited and ready for viewing, I give you the music video, JOHN HUGHES-

JOHN HUGHES is the new video from NYC electro-pop artist Q*Ball (www.qballmusic.com), from the critically-acclaimed album, Fortune Favors The Bald. Q*Ball music draws comparisons to the ethereal sounds of Moby, the vocal stylings of Bono & Mike Patton, and an eclectic array of more popular acts like Beck, the B-52's, New Order, & Duran Duran. JOHN HUGHES, in particular, evokes an 80s synthpop sensibility and nostalgia from that era that's reflected in this new video directed by Seth Kushner and Carlos Molina of Culture Pop Productions.

Q*Ball, in defiance of the corporate, pre-packaged, American Idol-era of music, started his own independent label in late 2005, Bald Freak Music (www.baldfreak.com), to release his own albums, as well as those from other artists who would otherwise be ignored because they don't fit the major label mold & preconception of what a "pop band" or a "rock act" should look & sound like.

JOHN HUGHES features Guns N' Roses guitarist Bumblefoot (who has a memorable cameo in the video) on guitars, bass guitar, and backing vocals. Bumblefoot (www.bumblefoot.com) is a longtime collaborating partner of Q*Ball's and has co-produced and performed on all three of Q*Ball's solo albums.
Seth Kushner (www.sethkushner.com) is an award winning photographer whose work has been featured in many publications and in exhibitions around the world. His first book The Brooklynites was published by powerHouse Books in 2007. He directed his first music video, Get it Together by recording artist Maya Azucena, earlier this year.
For his second directorial effort, Kushner has teamed with Carlos Molina, under the banner of Culture Pop Productions (www.culturepopproductions.com). Inspired by Q*Ball's 1980's sound used in JOHN HUGHES, the directing team of Kushner + Molina have translated it to visuals evoking the genre of 80's teen films, but with a dash of their own sensibilities. 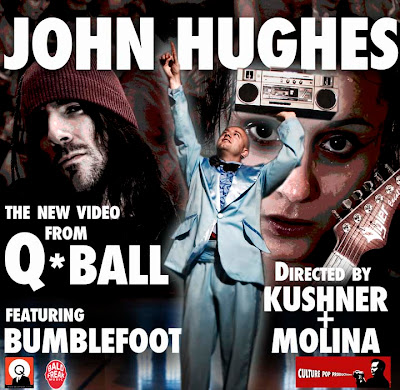